This is a story from a long time ago. It has come up again and again in various contexts, but the message, the meaning, remains consistent; an essential concept that remains relevant to just about everything I do.

This iteration begins at one of my favorite bookstores, Skylight Books in Los Feliz, where I discovered an intriguing little tome: The Pictorial Webster’s – a collection of engravings from the 19th century Webster’s dictionaries. I love this sort of thing (indeed, there’s an 1892 Webster’s sitting on my shelf right now, that contains a number of the same wonderful images) and I perused the pages for a while; then I flipped to the beginning and noticed the dedication: for Sam Walker (1950-1999). 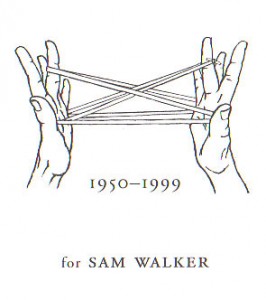 Could this be the same Sam Walker I once knew? My teacher and advisor when I was studying art in Boston, back in the ’90s? There were a number of clues suggesting so: the dates were about right (Sam Walker, the professor, I later learned, died shortly after I graduated); also the author of this collection, John M. Carrera, was from the Boston area and is a printmaker (I knew Professor Walker as a drawing instructor, but printmaking was his primary medium).

An interesting bit of synchronicity.

And it prompts me to retell the “process vs. product” story, once again …

Years ago, in art school, one of my studio classes was a drawing workshop led by Professor Walker. Usually a session involved three or four hours of drawing in charcoal or pencil or ink, often with models. From time to time there was a lecture before we started working, and on one occasion we arrived in the studio to find an array of varied images tacked on the wall – ranging from student works to recognizable drawings by well-known masters. The professor announced that we’d be having a discussion before we started drawing that day, and the topic was a simple question:

Look at all these images …
… and I want you to tell me which ones are … art.

Now this being a studio class, most of us assumed we’d be having a technical discussion, weighing the effectiveness of one technique or medium over another or judging the relative rendering ability of a particular artist and so on, and the discussion progressed largely in this manner for some time as we went around the room, each of us adding his or her thoughts.

Finally came the fairly inevitable question, and a student replies to the professor, “OK, well, you’re the instructor … what’s the right answer? I mean, which of these do you think is ‘art?'”

Professor Walker pauses for a moment, glances back at the images on the wall, then turns to the class …

None of this is art.
These are artifacts.
Evidence of the artistic process …
… but not art.

Art and artifact – not the same thing! This was something like a moment of Zen enlightenment for me: it instantly made so much sense, yet it is so directly opposed to the view we have in our overwhelmingly materialistic society. We – artists and audiences alike – have a strong tendency to think of “art” as something tangible, something physical – something we can buy or sell or hang on our wall or show to somebody else and say “this is mine” – something that has some permanence to it, something that will last …

But it won’t last, of course – nothing (no thing) will. Entropy (the heat-death of the universe, a concept introduced to me by my first computer science teacher, Mr. (Chip) Bailey, in high school) will eventually prevail, and all the artifacts – the paint and canvas, the orchestral scores, the film and videotape, all the ones and zeros on hard drives, everything you and I have labored to create, along with the works of Bach and the Beatles, Leonardo and D.W. Griffith – it will all be reduced to nothingness at some point … maybe we’re talking about the lifetime of a compact disc or DVD or archived data tapes (supposedly 100 years or so), maybe the amount of time before our civilization collapses and our cities and museums are reduced to ruin (which may indeed take less time at the rate we’re going, but that’s another topic) … in any case, it all goes away, sooner or later.

Now, this can be a rather depressing thought, especially to those of us who spend countless hours attempting to create things, things that are real and lasting … longing for the moment when something is “done” and we can, perhaps, send off a master or upload a final edit, no longer worrying about a hard drive crash or a fire in the studio destroying all our efforts.

On the other hand, if we think of things in terms of process – “art,” not “artifact” – we realize that while it can be quite satisfying to have that “finished product” – to press the vinyl 12″, or screen the film – it doesn’t really matter: the “art” is already there … one could say it has already happened but to use the past tense seems incorrect: there is a timelessness about that moment of creation, that event, that spark, the nexus that is formed connecting the artist with the world, with the past, present, and future and the web of everything (a moment locked in phase or harmony with the Tao, if you will). This is real and inviolable and cannot be taken away.

Sure, the artifact does have some value, in that it can provide an opportunity, a channel or medium for an audience to somehow connect with the experience of the artist, with the power and sublimity and timelessness of the process. This is perhaps why we feel the need to lock things up in museums for safekeeping – despite the fact that this creates an environment where it becomes easy to miss the point.

Now, what about a scenario where the process, the creation, and the experience of the creation by the audience are all happening simultaneously? This is what happens in an interactive media installation, and, of course, in a live performance context: add a bit of feedback from the audience and the lines of artist, art, and audience become blurred – and the process, transience notwithstanding, becomes even more robust, more powerful, more meaningful …

And this has been a central area of interest and endeavor for me ever since.

View More Posts:
The Franklin School (1869) has a place in the his