The Face of the Coachella Astronaut

LA Weekly summed up this project as follows:

The immense moving astronaut sculpture certain to become the central visual touchstone of Coachella 2014 featured three different video systems: a reflection cam pointing downward, seeing what the astronaut sees; a camera that, during randomly chosen intervals at the fest (and also at Instagram hashtag #missionpk14), puts your face into the astronaut’s helmet; and one displaying prerecorded video images. The first wo create an opportunity for selfies on the grandest of scales … 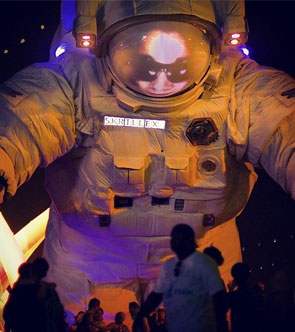 Earlier this year I joined the Poetic Kinetics team in the creation a 50′ tall animated astronaut for the 2014 Coachella music and arts festival. This massive art piece included full articulated arms and hands and was able to move from stage to stage and all around the vast festival environment. During the day, the astronaut’s helmet visor was covered with a reflective gold cover (as we’ve seen in photos of NASA astronauts) – but at night, the cover could be removed, revealing a curved rear-projection surface. Working with our friends at Pearl Media Productions, we designed and installed a multiple-projector system that could fill the astronaut’s visor with images. This gave us a large-scale canvas we could work with for visual effects. In addition, LED panels were installed on the astronaut’s chest to form a dynamic name badge, as well as a camera system to be mounted on the helmet for a “POV view” that could be channeled through the on-board media servers along with the other video content.

We had a variety of content – some thematic material, some simply psychedelic. But we also wanted to add an element of interactivity to the piece – we wanted to involve the audience, to give members of the audience a chance to identify with, or – better yet – to become the astronaut.

To bring the audience into the experience, I designed and implemented a capture and playback system that also provided a single point of control for the media servers.

The portable camera rig included a custom mattebox with integrated lighting and a tablet app for video capture and remote contol of the playback component and media servers. Captured video was sent to a file server, then cued by the remote control and played back by a custom playback app to the media server (which handled warping and blending for the visor surface). Another app handled rendering the names as text for the name badge, sending a video feed to a second media server driving the LED panels. 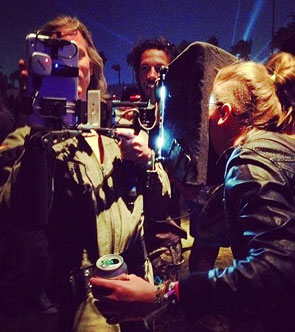 We used this rig to capture video clips of attendees, as well as of several of the artists performing at the festival. For attendees, we’d sequence the playback in such a way as to allow individuals time to capture images of themelves as the astronaut. In the case of performing artists, we’d often position the astronaut near the stage during the set so the artists could look out over and see themselves looming over their audience.

The on-site production demanded constant interaction with the social media team as well as artists’ representatives – as we’d not just be capturing content on site but also pulling images from socal media channels. When these assets (“selfies on the grandest of scales”) were displayed on the astronaut we’d often need to coordinate getting photographs to send back out to the social media world. The intent was to create an experience not just for the audience at the event, but for fans around the world.
Check out this recent interview with Patrick Shearn of Poetic Kinetics.

View More Posts:
The Franklin School (1869) has a place in the his