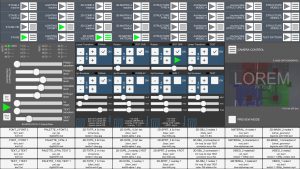 The VS4 (“Visual Synthesizer, iteration 4”) project is finally at a point where it can be called a Beta version. While I’ve just been running simple test patterns through it so far, the basic architecture and feature set of this tool for audiovisual performance and real-time motion graphics are pretty much complete and functional (though there are still a number of secondary features and options that need to be implemented before it’s really usable; “Bare Bones Beta” might be a more accurate title).

In this iteration there’s proper asset handling (this included working out the Lightwave-to-Unity pipeline as well as Unity asset bundle management), MIDI input from Ableton (which will eventually be replaced by two-way UDP via M4L plugins, but good old-fashioned MIDI works for now!), a more-or-less final UI layout, and so on. Getting 1080p output at pretty consistent 60fps. Fun!

On the agenda for the next rev are more “structures” (3D compositing modes) and 2D/3D asset packages, preset logic, NDI input and output and some more code for translating visual data and physics events to note on/off and continuous controller data to send back to Ableton.

A lot more to do. But this is still a significant milestone in a process that began last year: